As you might already know, IFTTT is an easy online tool that allows people with no specific tech skills to create rules (called “recipes”), which connect an event stemming from a service (e.g email) to an action executed by another service (e.g. twitter). Service providers are called channels and you can only create rules from available channels.

The beauty and the success of IFTTT lie in its simplicity. However, this is also one of its weaknesses: recipes are often too simple and cannot do much more than trigger a single action, which does not cater to many real-life situations. For example: consider the recipe that specifies “if a water leak is detected, send an email notification”. What if you also wanted to turn off the water system, send an email to a plumber and shut down electronic appliances if the leak was above a given threshold?

In other terms, IFTTT if not designed to implement orchestrations and define business rules, which is actually the realm of scriptr.io. In this tutorial, we propose to explain how to get the best of both worlds: combine the simplicity of IFTTT to the power of scriptr.io, by allowing IFTTT end users to invoke the complex logic implemented in your scriptr.io scripts.

Purpose of this tutorial

In the below we will learn how to create an IFTTT recipe that allows you to invoke any script in your scriptr.io account, from an IFTTT endpoint. On that purpose, we will use IFTTT’s maker channel that allows makers to connect IFTTT to their own APIs.

As a reminder, an IFTTT (if “this” then “that”) recipe contains two main components: this, which defines an event to react to, and that, which defines the action to execute upon the occurrence of the event. In our case, we will match this to an incoming request on a specific endpoint, whereas that will forward the request to one of our scripts on scriptr.io.

Click on the highlighted “this” to define a trigger condition. In the list of all available channels that appears, select the “maker” channel. 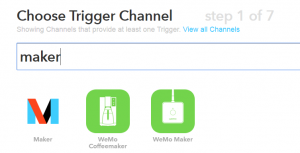 Since we are using the maker channel, the only available trigger is “Receive a web request”, which is exactly what we need. Clicking on the corresponding link takes you to a form field asking for an event name. Type “scriptrio” (or any other word that suits you), then click on “Create trigger”. The “event name” is actually added to the IFTTT endpoint that you can expose to your end users (https://maker.ifttt.com/trigger/event_name/with/key/your_ifttt_api_key)

Click on the highlighted “that”. Once again, we are presented with a list of possible channels. Since our purpose is to invoke a script on scriptr.io, we’ll select the maker channel.

Click on “Make a web request”, the only available option.

The form that appears allows us to configure the way we will invoke our scripts in scriptr.io. If you are not familiar with IFTTT, note that the latter provides you with 5 parameters that you can use to build the action:

You can use any of these parameters to build the action in any of the form fields. In this tutorial, we will use Value1 to specify the name of the script we wish to trigger on scriptr.io and Value2 will be a stringified JSON structure holding a map of parameters to send to the specified script. 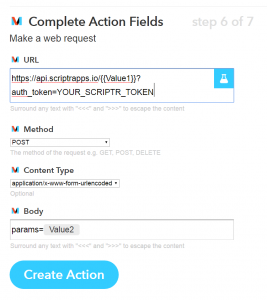 Once done, click on “Create”. In the last step, specify what title you would like your recipe to have and check or un-check the “Receive notifications” option. Finally click on “Create Recipe”.

Let us now move to scriptr.io and implement a test script that will be invoked by our recipe. We suggest creating a simple script that expects to receive a stringified JSON object with location, type, radius (in meters) and email properties. The script passes the location, type and radius values to a Google Places API to find the nearest places of the given type (e.g “restaurant”). It then sends the result by email using the received email value.

Note: if you do not have a Google developer account and/or a Google API Key that is fine. Don’t copy/paste the below into your scriptr.io account as a new script. Instead, just use the demo script

Name the above script “findPlace” and save it in your scriptr.io account

In order to test your recipe, you just need to issue an HTTP request to the following endpoint: https://maker.ifttt.com/trigger/your_event_name/with/key/your_ifttt_api_key

Notes: Make sure that your maker channel is connected on IFTTT

Note: observe that although IFTTT’s recipe creation wizzard uses “Value1”, “Value2” and “Value3” when defining the action, you actually have to send “value1”, “value2” and “value3”.

Connecting to Wittra and Visualizing your Device Data in a Scriptr.io App

Configuring a MultiTech Gateway to Push Data to AWS IoT