From Orchestration to more Collaboration

With the advent of IoT, the Internet has moved to a model where devices connect to other devices, applications or services, in order to implement new types of applications and business processes. However, most of the devices currently used as part of IoT solutions have rather limited capabilities, seeking a balance between price, performance and power consumption. As a consequence, the main part of the – computing intensive – logic that defines IoT applications is implemented and executed today on IoT cloud-based platforms, such as scriptr.io, which provide the required software and hardware infrastructure.

On another hand, Moore’s law and market studies predict that the price of connected devices will continuously drop whereas their performance will proportionally rise. In parallel, computing on the Edge – also called Fog Computing, a term coined by CISCO – fosters the availability of computing capabilities and services at the edge of the networks. Moving computing and services at the edge is expected to offload cloud platforms, prevent unnecessary bandwidth use, and free real-time applications from being subdued to network latency.

Drawing from the preceding points, it makes sense to think that in the near future, part of (but not all) the processes that are currently running on IoT cloud platforms will be moved back to “smarter” devices. This will result in a shift from a centralized, orchestration-only model, to a distributed and multi-agents model, with less centralized orchestration and more collaboration among devices, platforms and third party services, making the vision of building the IoT by assembling smart objects a plausible reality.

While many collaboration scenarios can be considered, we’ll use the generic model depicted in the following figure, representing collaborations taking place among entities residing at three different levels : 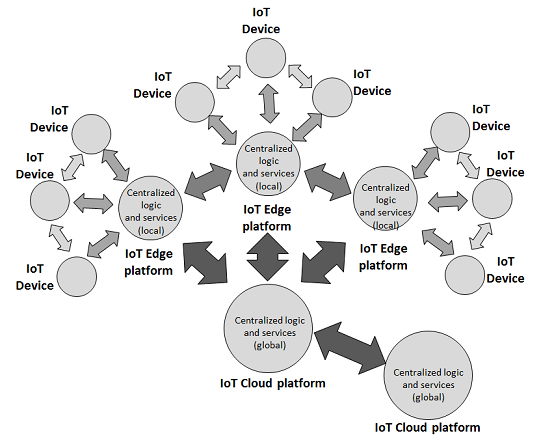 Enabling cooperation based on this model requires the availability of a middleware to provide service lookup, security, communication, interoperability, orchestration and location transparency. Location transparency is complementary to service lookup and means that the details of accessing services should be kept as transparent as possible to the applications and other services that are running on a given layer.

We have implemented a prototype of the aforementioned middleware based on scriptr.io, which already provides most of the required services. We also created a version of scriptr.io that can be deployed on edge nodes, such as gateways for example. This version has the same functionalities as the cloud version, except for scalability and fail-over. We also extended the capabilities of the platform by defining and implementing “collaboration agents”, of which role is to facilitate the communication of the applications and services residing on different layers of the architecture. We identify two types of agents:

(2) “Device” agents that are deployed on devices and offer two services: 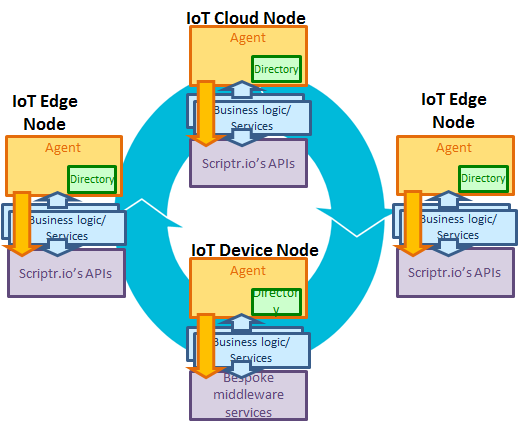 In the below we give a simple example to illustrate how to enable collaboration using our prototype. Our example uses two scriptr.io edge nodes (E1 and E2) that refer to the same scriptr.io cloud node (C).

Node E1 hosts an account in which we deployed our Nest connector and exposed its “setTemperature” method as an API. The account also contains a simple script that register the API as a service in the service directory, using the edge agent.

For now, our prototype imposes saving the above script as “temp_control/api/setTemperature”.

Register the API as a service in the service directory

On Node E2, we have another account that contains an IoT application (in our case a simple script) that needs to set the temperature of a given room, using the first available “temp_control” service provider:

Moving your API on scriptr.io from RPC to REST