Connected health is a new model for health management that leverages technology to deliver care outside of traditional health care settings. While the demands on health and social care services are increasing, notably because of a growing and ageing population, cost of medical treatments are rising whereas health and social budgets are more and more constrained.

Technology can provide interesting and cost-effective solutions to the aforementioned concerns, by:

Despite some obstacles that yet need to be overcome (shared medical records, privacy, implementation of smart applications, etc.) the progress of Connected Health is facilitated by the proliferation of mobile devices in the population, and the increasing number of wearable devices that track biological data such as blood pressure, oximetry, spent calories, etc.

Withings is a company that designs smart wearable devices such as activity trackers with bio-sensors, smart scales and sleep monitors. It is actively involved in the Connected Health endeavor and has notably founded the Health institute that conducts surveys and scientific studies to “accelerate the connected health revolution”.

Have a hand in the connected health market share with scriptr.io

BCC research predicts that the market will reach $21.5 billions in 2018, with a five years (2013-2018) compound annual growth rate of 54.9%, making it one of the most attractive sectors of the IoT. In line with what we wrote in our July post related to our fibit connector, we believe that connected health apps will heavily require back-end capabilities such as integration, orchestration, persistence and messaging, which are provided to you by scriptr.io.

If connected health makes sense to you – as it does to us – then you will probably think of – or already are – using Withings devices to implement your app. You now can also leverage our Withings connector, that wraps all Withings APIs and expose them – with some additional features – as methods of JavaScript objects that you can seamlessly add to your own scriptr.io scripts.

In order to illustrate how to use the scriptr.io connector for Withings to implement connected health applications, we will implement a simple app that exposes the following features:

Get the complete source code of the sample application

Components of the application

Our application will be composed of the following elements:

Let us now start with the implementation of the subscriptionManager

This script is called by front-end clients in order to subscribe a user to or unsubscribe him from the Blood Pressure notification sent by Withings. Clients should invoke this script passing the “action” (subscribe/unsubscribe) and “userid” (the user’s Withings id) parameters.

Now let us retrieve the “action” and “userid” from the request that triggered our script using the native “request” object:

In order to interact with Withings, we now need to create an instance of the “User” class (from the “user” module) using the userid, then ask for an instance of “NotificationManager” in order to handle subscriptions:

Last step is to test the value of the “action” variable in order to invoke the adequate method of the “NotificationManager” (“instancesubsribeToNotification” respectively “deleteSubscription”), specifying the notification type.

That’s all. We now can subscribe to / unsubscribe from Withings notifications.

Using the above values, we create an instance of User then ask for the latest Blood Pressure values for that user:

High blood pressure can result from different causes such as: overweight – and notably important fat mass – or lack of sleep. We will now implement two different functions, one that gets the fat mass ratio in the user’s body and the other that checks how well he slept for the past 7 days:

Since fat mass can result from lack of activity, we also implement a function that checks the user's activity for the past seven days. This helps us in better identifying the reason behind the high blood pressure.

Our next step is to implement a function that sends an email to the end user, in order to keep him informed. We use the native "sendMail" function for that:

Let us orchestrate all of the above in a main function that tries to determine the reason behind the high blood pressure:

We now only have to update our script in order to invoke the above functions:

Last but not least, we need to instruct the connector to use the "healthMonitor" script as a callback
for heart and blood pressure notifications. This is simply done by modifying the
/withings/common file of the connector as follows: 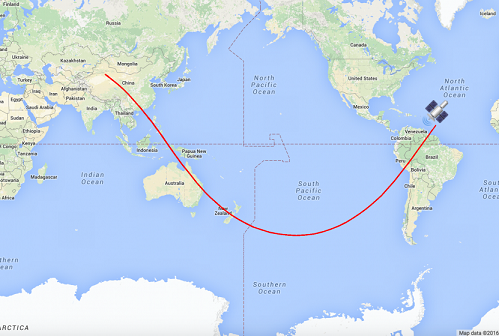 Where is the International Space Station Right Now?